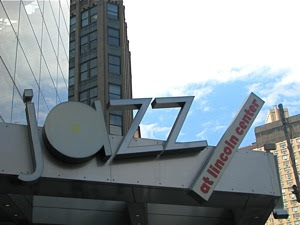 What a pleasant surprise to see the River East Collegiate Senior Jazz Band of Winnipeg participate in Essentially Ellington last week in New York City. I was visiting my son who lives and works in the city, but also cheering on our local band, the South Whidbey High School Jazz Ensemble. They, along with River East, were among 15 North American high school jazz bands named finalists earlier this year. The competition and festival was held May 15-17 at Jazz at Lincoln Center in New York City.

The Essentially Ellington High School Jazz Band Program was created by Jazz at Lincoln Center during the 1995-96 season. The program supports the development of school music programs through distribution of the music of Duke Ellington and other cirriculum resources, including recordings, teaching guides and expert feedback.

The annual competition and festival is held each May in New York City -- this year marked the 13th anniversary of Essentially Ellington. Last fall, 82 high school jazz bands applied for the program, and the top 15 bands were selected as finalists through a blind screening process.

The River East Collegiate Senior Jazz Band was the only Canadian finalist. Director Jeff Kula's 's band performs locally and also at the provincial and national levels. The band was an Essentially Ellington finalist in 2003, 2004 and 2007.

You can read more about the competition and festival my Seattle Post-Intelligencer blog.
Jazz at Lincoln Center is located in the Time Warner Center
Photo by Sue Frause
By SUE FRAUSE at May 18, 2008