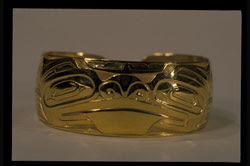 The University of British Columbia Museum of Anthropology (MOA) has been devastated by the theft this weekend of 15 objects, including 12 pieces by the renowned late Haida artist Bill Reid.

Collectively, the monetary value of these pieces as art objects is approximately $2 million. However, the dollar value of the gold in these artworks is significantly less, only $15,392 if computed at current gold prices.

“The theft of these art objects is a loss of cultural patrimony for the whole of Canada,” MOA Director Anthony Shelton said today. “We are working with the RCMP as they conduct their investigation, and are hopeful that these cultural treasures will be recovered safely.”

The University of British Columbia is posting a reward of up to $50,000 for information leading to the safe return of the stolen artworks in their original condition and the arrest of any suspects involved in the theft by June 30, 2008.

Referring to one of the stolen Bill Reid pieces, an extraordinary gold box with a sculptured, three-dimensional eagle on top, Shelton said: “This theft is the equivalent of a kidnapping aimed at one of the signature pieces of First Nation art that carries and communicates the creative genius of the whole of the Canadian people. The perpetrators must realize it is the Nation that will be their judge.”

Photographs of the stolen artworks can be seen on the UBC web site.

Gold bracelet by Bill Reid, circa 1960
Photo courtesy University of British Columbia
By SUE FRAUSE at May 26, 2008