Movies/cocktails the "buzz" in Toronto 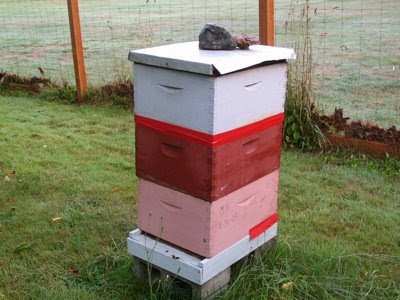 The Toronto International Film Festival (TIFF) opened on September 4 and there are no shortage of tie-ins with the hospitality industry. The Fairmont Royal York, which has its own 14-story rooftop apirary, is using the fresh honey produced by the 10,000+ bees to create an exotic cocktail called The Festival Buzz.

This yummy cocktail features fresh honey and mint from the hotel's apiary and rooftop garden. Priced at a queenly $22, it's served in a champagne flute and available at both the Library Bar and EPIC lounge.

TIFF is widely recognized as the most important film festival after Cannes and the most successful public film festival in the world. Now through September 13, more than 352 films will be presented. On September 5, the Gala premier of The Secret Life of Bees was held -- a perfect accompaniment to the recipe for The Festival Buzz:

Stir juice and honey in a shaker glass. Pour into a flute glass. Top with champagne.

Bee hives in our garden in 2007
Photo by Sue Frause