Continental Airlines commences flights from Edmonton to Houston on Nov. 1, 2009 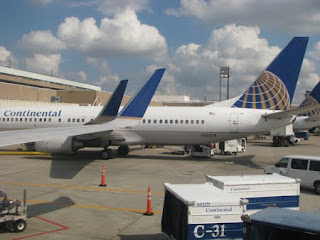 Continental Airlines will begin offering daily-non-stop service from Edmonton to Houston on Nov. 1, 2009. Air service between the booming oil and gas powerhouses of Edmonton and Houston seems like a natural fit. The Canadian province is also hoping to create new tourism opportunities for Texans in Alberta. Conversely, Houston is a major jumping off spot for many vacation destinations to the southern U.S. and Latin America.

"Houston is consistently one of the top 10 destinations for Edmonton and Northern Alberta travelers," said Ron Gilbertons of the Edmonton Economic Development Corporation. "Texas is also the number three US travel market to Alberta. This new service now offers an efficient non-stop link to the many travelers visiting our region," said the EEDC President and CEO.

In addition, Continental's new non-stop air service between Edmonton and Houston will be a business advantage to the 3,000 companies in Alberta’s International Region. "Much of our business is contingent upon direct connections to the US, and international destinations," said Pat Klak, Executive Director of the Leduc-Nisku Economic Development Authority. "This new link to the oil and gas industry ties strongly to Leduc and the Nisku Business Park, one of the largest oil and gas parks in North America."

The Houston-Edmonton route will be serviced by a Boeing 737-500, 114-seat aircraft (106 coach seats, 8 first class seats). Continental will become a Star Alliance partner on Oct. 27, 2009. Travelers may redeem frequent flyer mileage on affiliated airlines such as Air Canada’s Aeroplan. Also coming in November is non-stop service between Houston and two other cities: Washington, DC and Frankfurt, Germany.