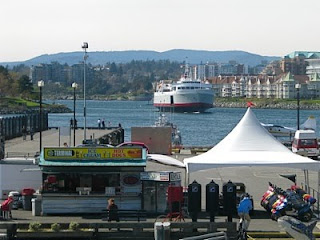 Victoria, BC welcomes the Olympic Torch on Oct. 30, 2009. This historic moment marks the start of the Vancouver 2010 Olympic Torch Relay. Arriving direct from Athens, Greece, the torch will begin its journey across Canada, traveling 45,000 km (27,961 miles) before arriving back in Vancouver, BC on February 12, 2010. That's the official start of the Vancouver 2010 Olympic Winter Games.

The Olympic Flame burns as a symbol of peace, brotherhood and friendship. The Olympic Torch Relay route will be the longest domestic torch relay route in Olympic history. Upon completion of its journey through Canada, the torch will have been welcomed in more than 1,000 communities and places of interest -- or passed within a one-hour drive from nearby cities and towns. More than 90 per cent of the Canadian population will have access to it.

You can follow the route of the Olympic Torch here.

Hotel packages for the Olympic Torch Relay are available at various Victoria hotels such as The Fairmont Empress, Hotel Grand Pacific, The Delta Victoria Ocean Pointe Resort and Spa, Accent Inns and the Queen Victoria Hotel and Suites.

When the Winter Games arrive, BC Ferries and a number of airlines will increase their service, making it easy for visitors to stay in Victoria and travel to and from the mainland for Olympic events and celebrations.