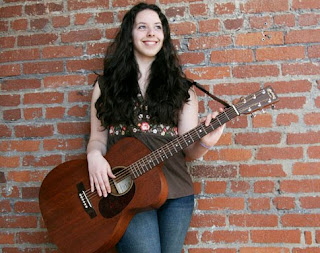 I'm a fan of many a Canadian musician, and was so saddened to hear of rising star Taylor Mitchell's death as a result of a coyote attack while hiking on Cape Breton's Skyline Trail.

"If a career in folk music hadn't come along, Taylor Mitchell might have spent the day training horses in Ontario, not walking a sun-kissed seaside trail between gigs in Nova Scotia. Life is unpredictable that way, and Ms. Mitchell, a rising young talent with the voice of an old soul, seemed to know it, though she was just 19. As such, no one could have foreseen the fate that awaited the Toronto singer-songwriter along Cape Breton's Skyline Trail on Tuesday: a pair of raging coyotes, out for her blood. Within moments, Ms. Mitchell lay dying, leaving a trail of grieving relatives, friends and fans, along with puzzled wildlife officials shocked by such a rare attack. One of the animals was shot and injured, but both were still at large."

You can read the rest of the story in The Globe and Mail.

May Taylor Mitchell's music live on.
By SUE FRAUSE at October 30, 2009

I didn't think coyotes ever attacked people, or that coyotes even existed in Canada

Yes, I received a lot of personal emails that people didn't know that coyotes attack people. I have heard they are in Canada ... but whatever the coyote issue, it's a real tragedy.

Those animals are unlike the thousands that dine on our pets and 'whatever' here in BC and thruout the prairies. (It surprises people they're living in gullies and forest areas in Vancouver)
See link below.
I'm a Canadian old fart and I didn't know there were wolf/coyotes wandering around Cape Breton (or anywhere in the eastern provinces)
As the article states, they've been migrating east.
Some of the clowns with the government parks should have had a handle on this.
A freakin' tragedy

BTW Kids: The creatures are very much throughout the western states.

100 days to the olympics.
Come see us