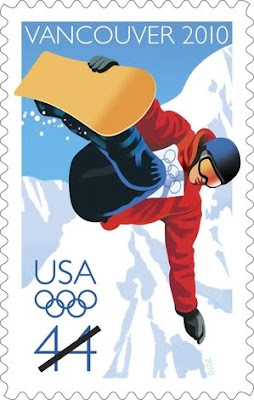 The US Postal Service continues its tradition of "honoring the spirit of athleticism and internation unity inspired by the Olympic Games" with the issue of a first-class stamp.

The stamp features an illustration of a snowboarder and will be issued Jan. 22, 2010 to coincide with the XXI Olympic Winter Games in Vancouver, Feb. 12-28, 2010.

Illustrated by Steve McCracken, the stamp captures the thrill of one of the Olympic sports with the portrayal of an airborne snowboarder against the backdrop of a snow-capped mountain.

Only problem is, the venue for the snowboarding competition is Cypress Mountain, which is severely lacking snow. So much so that the mountain was closed to Alpine skiing earlier than planned, according to NBCOlympics.com

As stated on Cypress Mountain's website, "We plan to re-open as scheduled on March 9th with as much terrain as possible for the Spring session and we hope to then be basking in the sun and the glow of home team Gold Medals."

The Nordic Area at Cypress is open for cross-country skiing, snowshoeing and tubing.
By SUE FRAUSE at January 23, 2010