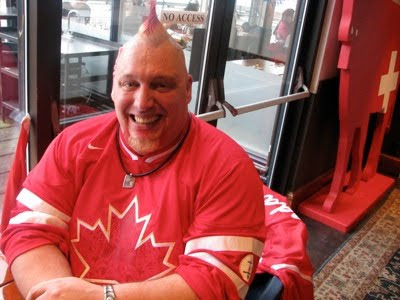 I saw no shortage of Olympic regalia while in Vancouver for two days before the Opening Ceremony of the XXI Winter Games tonight.

But Andy Maxwell of Victoria takes the gold for the most decked-out Olympic fan.

While enjoying an afternoon libation at the House of Switzerland on Granville Island, I couldn't ignore the colorful Canadian as he walked into the venue (Bridges restaurant).

The House of Switzerland is a great spot for enjoying fondue and other Swiss specialties (they brought in two Swiss chefs); hanging out with Swiss athletes (they're hoping to win 14 medals); and watching live broadcasts of the 2010 Winter Games.

Andy and his wife Karen say they're total Vancouver Canucks fans. So it's no surprise the couple bought tickets for all the hockey and curling events. To ease their commute from Vancouver Island, they've rented a condo in Vancouver for the run of the Games.

The House of Switzerland is one of the few national guest centers open to the public; admission is free. There's also a Whistler outpost in what was the former Mountain Club restaurant in Whistler Village.

Andy said he's attracted a lot of attention, including Evening Magazine. The popular Seattle TV program snagged Andy for an interview and the piece is to air on Monday, Feb. 15 on KING-5.

Andy Maxwell of Victoria at the House of Switzerland
Photo by Sue Frause
By SUE FRAUSE at February 12, 2010