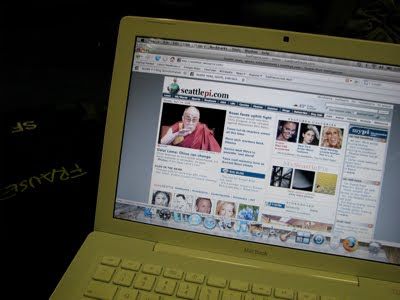 Canadians will have to wait another month to purchase the iPad in their own country.

According to the Toronto Star, the popular techno tool/toy won't be available until the end of May 2010.

It was originally scheduled to be launched in Canada today, April 24.

I'm still weighing in on whether I need an iPad. Oh sure, I want one, but my MacBook has been great for travel. Although lately the WiFi connection seems to be acting up so I may need to check into a Genius Bar at Apple and see what's up.

I still want the Kindle, because all I want to do is read books. I still haven't figured out my blackberry, it would take years to learn the iPad.

But you can read books on the iPad, right? Although more limited than Kindle I think. I'm still figuring out my Droid but do love it. Thinking my hubby might buy an iPad and we could share it. Biggest drawback is when I travel I download all my photos onto my MacBook ... I think with the iPad you have to get some sort of attachment. We shall see!

Sue, apple has a $29.00 attachment for the iPad that will allow you to upload/offload your photos from your camera to your iPad. That will allow you to back up your images and upload them to flikr. I'm still on the fence myself. I too have a MacBook as well as an iPhone. What I really want/need is a new digital SLR.

Yes, I knew about the attachment ... but I use iPhoto, and is that part of the iPad? I would think so. I also use Flickr/Picassa. I'm thinking since what I have works, why make the switch? As far as cameras, I love my Canon SureShot. I see fellow travel journalists with these huge cameras that are so "get in the way" for both user and subject, I'm happy with my smaller camera and it takes great photos. Thanks for the input!

Oops. I always call my camera a Canon Sure Shot. Sorry, but it's a Canon PowerShot S5!