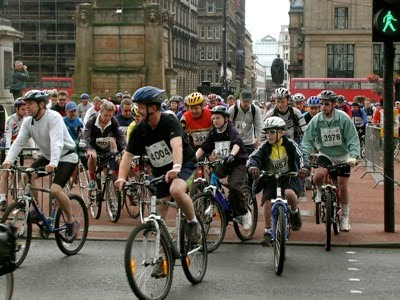 
Cyclists race through the streets of Banff and throughout Banff National Park. The various courses include hairpin turns; bikers will encounter breakaway sprints and fierce competition; and spectators can idly stand by and soak up the scenery of the Rockies.

These aren't Banff bikers, they're part of an event in Glasgow, Scotland Photo by Sue Frause
By SUE FRAUSE at June 09, 2010