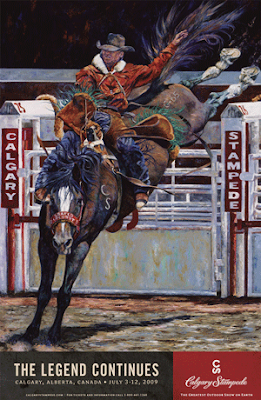 I admit to not knowing about Grated Coconut. Up 'til now, grated coconut was a baking ingredient, usually during the holidays when making fancy cookies and bars.

But this Grated Coconut is a horse, and not just any old horse. He's the Calgary Stampede's six-time world champion bucking horse. And he's in the news again, this time tendering his resignation to retire from competition.

Grated's last competition was at the National Finals Rodeo in Las Vegas in 2009. According to Dr David Chalack, President and Chairman of the Board of the Calgary Stampede, he's now "primarily interested in spending time with the mares."

He'll spend the rest of his days at Stampede Ranch, retiring as the current Canadian and world champion. Chalack says he'll continue to be the foundation for the Born to Buck breeding program.

During this year's Calgary Stampede (which I'll be attending for the first time), Grated Coconut will be given a special tribute on Final Sunday of the Stampede Rodeo.

Grated Coconut appeared on the 2009 Calgary Stampede poster
By SUE FRAUSE at June 24, 2010