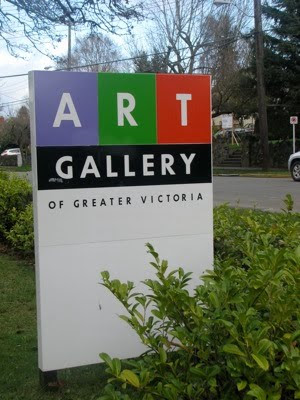 The Art Gallery of Greater Victoria opens a new, semi-permanent installation on June 30, 2010 focusing on the life and works of Victoria's own Emily Carr.

The exhibition, Emily Carr: On the Edge of Nowhere, focuses on the history of Carr's career. It includes pieces in all media and styles in which she worked, with influences ranging from European modern art and the Group of Seven artists to the First Nations of British Columbia.

Although Carr called herself “an isolated little old woman on the edge of nowhere,” her art has widespread appeal. The selected works focus on her inspirations and connections to the West Coast landscape that was her home.

The Art Gallery of Greater Victoria currently houses 42 of Emily Carr’s works, and through collaboration with other galleries and groups, strives to become the premiere destination on Vancouver Island for visitors to learn about Emily Carr and her importance to BC’s and Canada’s artistic landscape.

The exhibition includes the gallery's newest acquisition, Shore and Forest, (Cordova Bay) Oil on Paper, 1931. There will also be an interactive multi-media station as part of the exhibition.

The Art Gallery of Greater Victoria has been located in the heritage Rockland neighborhood of Victoria since 1951. Its original home was an 1889 mansion, and over the years it has expanded to seven modern exhibition spaces. It's just a short walk from downtown and close to the Craigdarroch Castle.

The Art Gallery of Greater Victoria
Photo by Sue Frause
By SUE FRAUSE at June 08, 2010