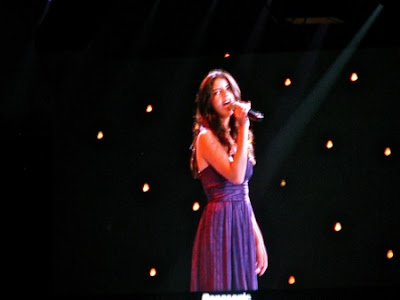 I first heard Nikki Yanofsky sing Canada's national anthem at the opening of the 2010 Winter Olympics in Vancouver. I was fortunate enough to have tickets for the 2010 Paralympic Opening Ceremony, and there she was again.

The 16-year-old, born in Hampstead, Quebec, is embarking on a big tour this summer that includes Canada, the US and Europe. She's off to Japan in the fall.

It's only fitting that one of her gigs is at the Montreal International Jazz Festival, where she made her stage debut in 2006. She was the youngest performer to ever headline for the festival, now in its 31st year. Here's her summer touring schedule:

Nikki Yanofsky at the 2010 Paralympic Opening Ceremony in Vancouver
Photo by Sue Frause
By SUE FRAUSE at June 22, 2010