Vancouver to follow Montreal by implementing the BIXI transportation system 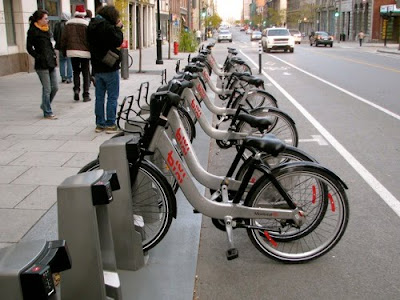 Launched in the spring of 2009, the City of Montreal introduced BIXI as the city's public bike system. Simply put, you pick up a bike from one station, travel to your destination and return the bike to another station in the network.

The system now has 400 stations and 5,000 bikes throughout Montreal. It's available three seasons a year from May to November (winter is excluded for obvious reasons), 24 hours a day for seven days a week. Fees range from $5/24 hours to $28/30 days to $78 a year.

The technology and design of the BIXI system was by Quebecers, including the manufacture of the majority of parts and the final assembly in La Belle Province. The bikes were adapted to withstand Canada's harsh climate conditions.

Montreal implemented the first public bike system in North America, and Vancouver will soon join the cheap-wheelin' alternative to driving. Here are some benefits to bike riding as listed on BIXI's website:

The BIXI movement is extending south of the 49th Parallel, too. Washington, DC and Arlington, Virginia are adopting the public bike system in the fall of 2010. There will be 1,100 new BIXI bikes at 114 stations along the Arlington-Washington corridor.

BIXI has been honored with numerous awards: Gold at the Canadian Public Sector Leadership Awards and the Institute of Public Administration of Canada; Time magazine's Best Inventions of 2008; and a Gold Edison New Products Award for Energy and Sustainable Development.

"The bikes were adapted to withstand Canada's harsh climate conditions."

I live in Montreal. Since the bikes are used three seasons per year, there is no need to adapt them for our "harsh climate conditions" which, in Montreal, are milder than many places in the US (e.g. Minnesota, North Dakota, South Dakota, etc.)

And Vancouver is milder than Montreal. It rarely sees snow. Rather than climate, I'd say that the bikes are engineered to be low maintenance, since users don't have the same incentive to take care of them as they would their own bike.

The system works great though. I'm thinking of moving back to Vancouver so I'm glad to see it's headed there.