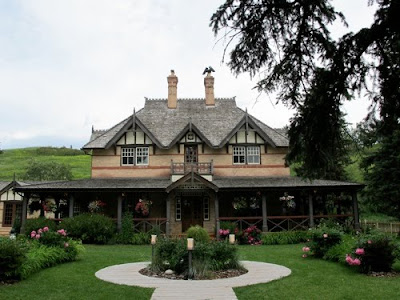 En route from Banff to Calgary, our traveling group of foodies stopped by The Ranche Restaurant in Calgary's Fish Creek Provincial Park.

Measuring three times the size of Vancouver's Stanley Park, it's one of North America's largest parks, at 19 km (11 miles) from west to east.

Although we didn't have time to poke around the park, which opened in 1975, it's home to an archaeological interpretive center that's part of the Bow Valley Ranch Visitor Centre, along with picnic areas and shelters, an aquatic facility/boat launch and plenty of trails.

The Ranche House, which was constructed after the original log home from the Government Supply Farm burned to the ground in 1896, was built by William Roper Hull. The rancher, originally from England, hired Calgary architect James Llewellyn Wilson to design the Queen Anne style brick ranch house. It was built at a cost of $4,000.

The building was renovated in 1945, and again in 1957, at which time a swimming pool and tennis court were added. By 1978, The Ranche House was boarded up and stood vacant. But in 1995, The Ranche At Fish Creek Restoration Society began a complete renovation, and four years later it was restored to its former glory. In 1999, The Ranche Restaurant opened; it also serves as a venue for corporate meetings and special occasion gatherings such as weddings.

The Ranche Restaurant is owned and by operated by Canadian Rocky Mountain Resorts, whose other properties include Buffalo Mountain Lodge in Banff; Deer Lodge in Lake Louise; Emerald Lake Lodge in Field, BC; Bulmer's Pointe in Kootenay Lake, BC; and Painted Boat Resort on BC's Sunshine Coast.

The Ranche Restaurant
Photo by Sue Frause
By SUE FRAUSE at July 19, 2010

Chill out bars in Singapore said...

The Alberta gem Ranche restaurant described by you serves tasty and mouthwatering dishes. The service is also excellent