August Long Weekend: Does Canada have more holidays than the US? 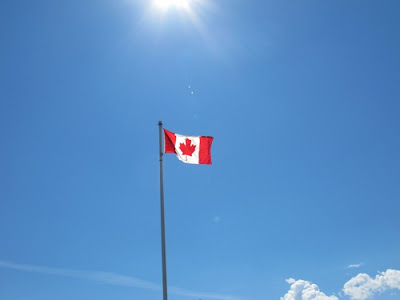 It seems that my Canadian friends enjoy more holidays than we do south of the 49th Parallel. Especially those living in Quebec!

I have a calendar that includes both US/Canada holidays. Let's see what they've got listed for O Canada in 2010:

The upcoming Long August Weekend is a civic holiday in all the provinces except Quebec, Newfoundland and Nunavut. It's sort of a dress-rehearsal for Labour Day Weekend, which we also celebrate in the US on the first Monday in September, but we spell it Labor Day Weekend.

At any rate, I'm heading up to Victoria for two days of the Long August Weekend. After spending Friday-Saturday at Jazz Port Townsend, I'll drive to Port Angeles and walk onto the Sunday morning sailing of the Black Ball's M.V. Coho to Victoria's Inner Harbour. No car needed.

Why not celebrate both US and Canadian holidays, eh?

I think we're pretty even. Easter Monday is not a national holiday, nor is it usually a paid holiday except in some religious circles.

The US has President's Day, MLKJr. Day, Memorial Day and Columbus Day. They would replace our Family Day, Victoria Day, Civic Holiday and Boxing Day. An extra day is often given if July 4 falls on a weekend, which doesn't happen here.

So...if you don't live in Quebec, the US may get one extra day for July 4, if it falls on a weekend. Otherwise, it pretty much evens out. (:

The holiday thing can get a bit complicated between what is actually a statutory holiday and what isn't but historically has been treated as such. Rememberance Day is a "stat" in B.C. but not everywhere, however many employers treat and pay as such. Easter Monday is a "stat" for federally regulated employers only, other employers are not required to give the day off. I worked for a communications company that was federally regulated so I got Easter Monday as a "stat". Also because unions have held on a bit longer in Canada most people have as much as six weeks off after twenty years of service or even Mother's Day treated as a "stat". The law reflects that history since everywhere in Canada an employee is entitled to two weeks vacation. Then depending on the province it goes up to three weeks after five years with Saskatchewan mandating four weeks after ten years. I was shocked to learn that places like California have no mandatory vacation laws and that people can work for years at a company and still legally, although I hope not in reality, get one week or none off.