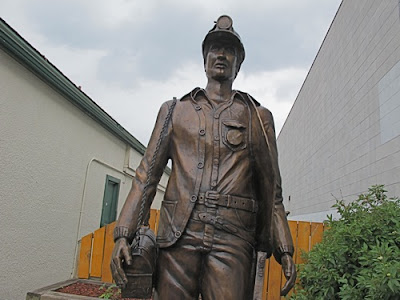 Somehow I missed Canmore on the map. It's a great little town in Alberta, which I somehow used to get confused with Cranbrook, which happens to be in BC.

I recently spent a night in Canmore as part of a nine-day culinary road trip in Alberta. It started in Edmonton, on to Canmore and followed by Banff and Calgary. With foodie stops in between, of course.

My favorite culinary treat in Canmore was a spot with the quirky name of crazyweed restaurant. Not only did I have a delish burger (homemade bun!) and fries, I loved the interior. It's open and airy and a bit IKEAesque in color and style. The restrooms are pretty cool, too.

A friend and I dined there after happening upon the Miner's Day Parade. It happens each year around the anniversary date of July 13, which marks the closing of the Canmore coal mines in 1979.

What's so unique about the parade, led by the RCMP and a bagpipe band, is that all the participants are relatives and/or descendants of the men who made their lives as coal miners. I stood next to an elderly gentleman who was waiting for his wife and her two sisters to walk by -- their father was a coal miner. Although the couple lives near Edmonton now, they travel every summer to Canmore to be a part of the festivities.

While in Canmore, visit the North West Mounted Police Barracks (1893) and the Ralph Conner Memorial United Church of Canada, both on Main Street. Then stop by The Grizzly Paw Brewing Company.