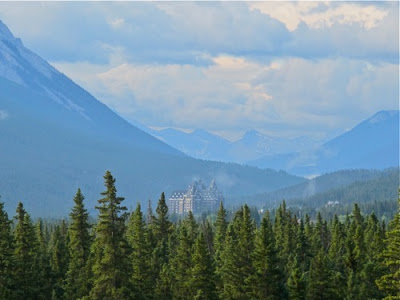 The Fairmont Banff Springs may be 122 years old, but its food is as fresh as can be. Cory LeDrew (pictured below), chef at The Banffshire Club at the iconic hotel in the Rockies, is at the forefront of the fresh movement.

I recently visited the hotel, more than 30 years after a summer stay. First stop was the Rundle Lounge, where I enjoyed a handcrafted cocktail (they also serve a lovely tea). It was a Pomegranate Cucumber Mojito, a variation of the classic Mojito. Ingredients included Bacardi light rum, freshly squeezed lime juice, local organic mint, cucumber and pomegranate puree all muddled, shaken and topped off with soda.

Afterward, Chef Cory gave us a tour of the hotel's garden, which included everything from herbs to rhubarb; the food items are incorporated into the hotel's menu. That evening, it was dinner in Grapes Wine Bar, originally established in 1926 as a writing room. Here's a bit more history of the Canadian Pacific Railway hotel from the Fairmont website:

Throughout the 1920's and 30's the hotel was able to combine day-to-day hotel life with the concept of luxurious hotel living. The depression played a part in the golden era as an unsure future forced people to examine the present and their reasoning lead them to live as fully as possible in an immediate sense. The hotel managed well in maintaining its ambiance of sophisticated respectability. It was a time of stylish attire, tasteful entertainment, and refined relations. The 1930's were also a high time for promotion and the hotel saw a growth in members of high society, including heads of states and actors visiting the hotel for photo opportunities in order to promote the persona or place needing exposure. The likes of Helen Keller, King George VI and Queen Elizabeth visited the hotel and Benny Goodman was influential in Banff obtaining a landing strip, as he wanted to stay at the hotel but could only do so if there was an area to land his plane. Stanley Thompson, a world recognized golf course designer, was selected to construct the world's greatest mountain golf course. 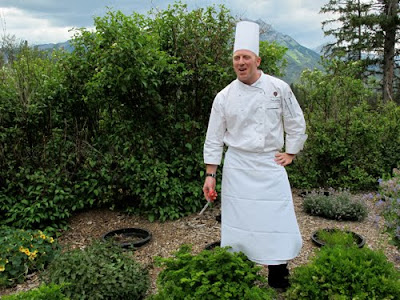 Photos at The Fairmont Banff Springs by Sue Frause
By SUE FRAUSE at July 15, 2010

Hi - I am really happy to discover this. cool job!

hello and merry xmas to every one - hope yous had a realy nice one - iv blew 3 months of dieting in one day ha , all the best for new year -
mick