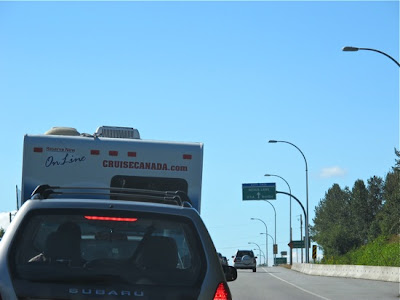 I know it's summer. After all, I live on an island, and the ferry lines have been horrendous.

But I didn't expect a 90-minute wait at the Canada-US Peach Arch Crossing between Surrey, BC and Blaine, WA. I arrived at 10 AM on a Saturday morning, and finally made it through the final gate at 11:30 AM.

Part of the problem are the cutters. Just like ferry line cutters, these people think they're being crafty and creative, but they're downright rude. Granted, part of the problem is the way the lanes are designated. This morning, the cars were backed up to the White Rock Exit, and were formed in two lanes. But the third thru lane on the far right was getting a lot of business, with people using that to get to the NEXUS lane. 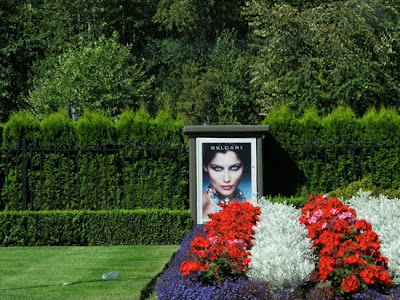 I don't have a NEXUS card, not did I want to go to the Duty & Tax Free Shop that is also accessible by that lane. Turns out that a lot of the drivers heading for the NEXUS lane all of a sudden realized they didn't have a pass, and then had to cut into the regular lane where we'd been patiently creeping ahead. Ditto with the drivers who went to the Duty & Tax Free Shop; it appeared that some of them merely went through the shop's parking lot, exited way ahead of where they entered, and then cut in ahead of those of those of us who were playing it right.

BC needs to cut the confusion on all of this with clearly designated lanes and improved signage -- it's not a problem when entering Canada from the US. And why should the Duty Free "shoppers" be rewarded for buying booze and perfume? Tempers were flaring as the temperature rose; and for solo drivers, it's really a drag. Guess what? If you have to go to the loo -- you lose. There's no ditching your car.

All the more reason to take Amtrak Cascades. 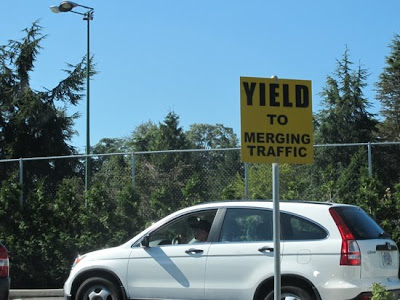 Photos at the Peace Arch Crossing by Sue Frause
By SUE FRAUSE at August 28, 2010

Seems so crazy to make people wait. It's one of my pet hates, people or organisations not thinking about things like this, and effectively wasting my life sat in queues. Glad you got through eventually.