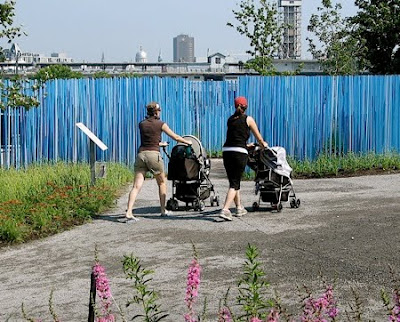 Any chance I have to write about Quebec, I do. If you've been reading my blog for awhile, you know it's one of my favorite Canadian provinces ... not that I have favorites!

Several years ago, I attended International Flora, the Montreal Garden Festival. Although it's no longer being staged, I bumped into another festival that looks equally impressive. The 11th International Garden Festival is at the Les Jardins de Metis / Reford Gardens in Grand-Metis, Quebec. Located near Rimouski at the base of the Gaspe Peninsula, the festival runs June 26 to Oct. 3, 2010. It's the leading contemporary garden festival in North America.

The 2010 edition's theme is Paradise, and features a record 21 gardens. Berlin is the invited/featured city, and the program includes the broadcast of the new documentary film, Twice Upon a Garden. There are also culinary, musical, cultural and artistic events held throughout the summer.

The festival's focus is on conceptual gardens at the crossroads of landscape architecture, garden design, architecture and environmental art. Sixty-five designers from Australia, Canada, France, Germany, Italy, Netherlands, United States and the United Kingdom have created the 21 ephemeral gardens. The 2010 competition attracted 276 proposals by more than 600 architects, landscape architects, designers and artists from 34 countries.


Garden sticks from International Flora in Montreal
Photo by Sue Frause
By SUE FRAUSE at August 26, 2010

I just signed up to your blogs rss feed. Will you post more on this subject?