Window on Canada: Salt Spring Island, BC as seen from Lopez Island, WA 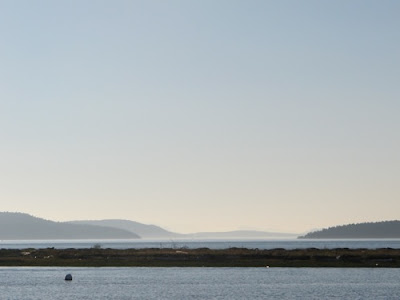 Although we often refer to British Columbia's Gulf Islands as the Canadian San Juans, I read somewhere where BC folks don't necessarily like that description. The funny thing is, I've never heard the San Juan Islands described as the American Gulf Islands. Weird, huh?

While having dinner with friends who have a place in Lopez Village, I enquired as to what I was looking at across the water (photo above). Turns out that it's San Juan Island, with Salt Spring Island behind it.

When my hubby looked at the photo he said that beyond that, barely visible, is Mount Warburton Pike rising in the background. It's located on Saturna Island.

View from Lopez Island
Photo by Sue Frause
By SUE FRAUSE at August 12, 2010

I’ve been researching the internet for quite some time trying to find good blog on canada. I’ve bookmarked your site and I’ll be back.

Great job . This is very nice and useful blog. This may be useful post. Thanks for sharing this post with us.