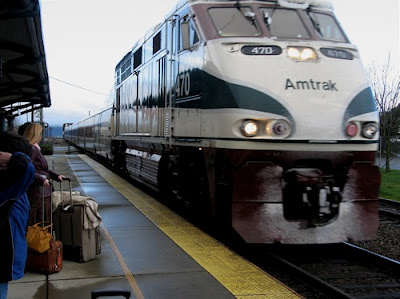 I guess it was too good to be true.

Although a second daily train to Vancouver, BC was added for the Winter Olympics (and recently been extended through Oct. 31, 2010), it looks like it may soon be a mere memory.

The Canadian federal government announced that it would require WSDOT to pay nearly $550,000 a year for border-clearance services. The money would cover additional staffing by the Canada Border Services Agency for the 10:50 PM second-train arrival.

Obviously, both Washington state and British Columbia are disappointed. According to Washington Transportation Secretary Paula Hammond, the second train brought an estimated $11.8 million in economic benefits to BC during the year it was allowed to operate. "Does it really make sense for $550,000 in annual border inspection fees to be the reason the service ends?" questioned Hammond.

The transportation secretary said the state has no money to cover the added cost; nor will they ask Washington travelers to pay more for their tickets. Currently, customers traveling into Washington don't have to pay a US Customs fee.

The Canadian government cites fiscal concerns as the reason for the additional fee.

Ridership on the second Amtrak Cascades train between Portland and Vancouver, BC grew steadily in the first year of operation, carrying nearly 245,000 passengers. Of these, 26,837 traveled across the U.S./Canadian border into Vancouver, BC.

Having just spent two weeks in Italy, where we relied on trains to get around, I'm disappointed that the Canadian feds don't have the vision to see that the second train between our two countries is a good thing for both sides of the border.

Amtrak Cascades arrives in Bellingham en route to Vancouver, BC
Photo by Sue Frause
By SUE FRAUSE at September 27, 2010