Calgary and Spokane: No direct flights between the two cities 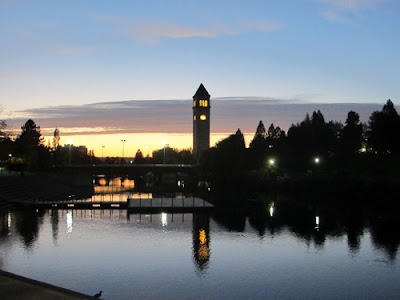 I recently spent a very fun 24 hours in Spokane, Washington. It was one of those perfect autumn days, with sunshine and blue skies, and lunch on the patio at the Red Lion River Inn overlooking the Spokane River. Not bad for an October afternoon!

After touring nearby Gonzaga University, an easy walk along Spokane's Centennial Trail, my friends and I indulged in some wine tasting at Caterina Winery, topped off by an opening night performance of South Pacific at INB Performing Arts Center. What a fantastic production!

I've always send a similarity between Spokane and Calgary; even their website addresses are similar. They're both inland cities located on rivers, and although mid-city cool with fine dining and an abundance of arts and culture, the friendly and folksy feel makes them pleasantly small-town. So imagine my surprise when I discovered that there are no direct flights between Spokane and Calgary. Really?

One Spokane local said Spokane is a popular destination for Calgarians and Albertans. And even though it's 691 KM between the two cities, the majority of them drive. After all, if you want to fly, you have to switch planes in either Vancouver (Air Canada) or Seattle (Alaska/Horizon).

I suggest that Alaska/Horizon put the Spokane-Calgary route on their future fly list.


The Great Northern Railroad Depot Tower looms over the Spokane River
Photo by Sue Frause
By SUE FRAUSE at October 08, 2010

I flew there a few times in the early 90's. I think it was on horizon or Alaska.
They had the US customs in Calgary, to go through before your flight since we don't have one in Spokane.
I don't know if US customs still has an office there. If not then they will not put a flight on, if so maybe we can convince them to resume service.