Inuit prints on display at Canadian Embassy in Washington, DC 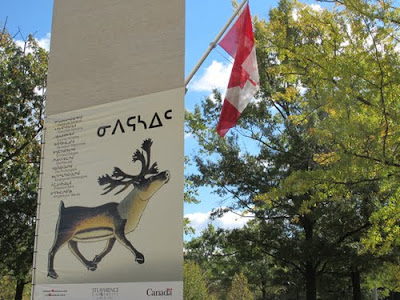 The Embassy of Canada in Washington, DC is located on one of the prime pieces of real estate in the nation's capital. Situated at 501 Pennsylvania Avenue, it's adjacent to the Newseum and north of the National Gallery of Art.

Canada's embassy, designed by BC architect Arthur Erickson, opened in 1989. According to Wikipedia, "Canada is the first, and so far only nation, to build an embassy so close to the Capitol."

A gallery is open to the public. Currently on exhibit is Nipirasait: Many Voices. The collection of 36 Inuit prints celebrates the 50th anniversary of Kinngait Studios of Cape Dorset in Nunavut. It's being presented in partnership with St. Lawrence University, and showcases a portrait of Inuit life and culture in the Canadian Arctic.

Embassy of Canada in Washington, DC
Photo by Sue Frause
By SUE FRAUSE at October 23, 2010