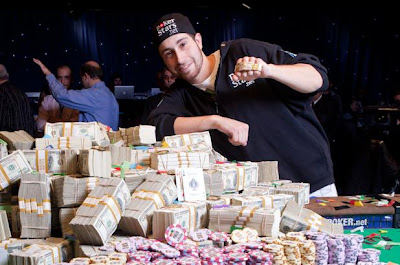 A 23-year-old Quebecer became the first Canadian citizen in history to win poker's world championship. Jonathan Duhamel, from Boucherville, Quebec, is the winner of the 2010 World Series of Poker Main Event Championship in Las Vegas.

Two Canadians have finished in the runner-up spot in the past 41 years: Tuan Lam took second place to Jerry Yang in 2007; and fellow Canadian Howard Goldfarb placed second in 1995, losing to Dan Harrington.

Duhamel, described as a poker pro, will take home $8,944,310 in prize money. Along with it, the iconic gold and diamond-encrusted gold bracelet.

The field of 7,319 entrants made it the second-largest WSOP Main Event in history. The tournament started July 5, taking more than four months to complete, which includes the recess prior to the November Nine.

Boucherville is a suburb of Montreal, located on the south shore of the Saint Lawrence River. Other noteworthy residents include Toussaint Charbonneau, a member of the U.S. Lewis and Clark Expedition, and husband of Sacagawea; hockey player Stephane Quintal; and singer/actress Ginette Reno (La Reno).