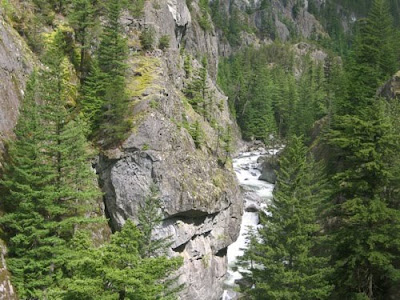 If you're a resident of British Columbia or Washington state, Rocky Mountaineer has a cool deal for you. Book a trip now aboard the Whistler Sea to Sky Climb route for travel between Vancouver and Whistler next year, and you'll receive a great fare.

I was aboard the Whistler Sea to Sky Climb in the spring of 2009, and the 3.5 hour journey is pretty spectacular. Unlike when you're behind the wheel, you'll be able to thoroughly experience the old-growth forests, cascading waterfalls and snow-capped peaks of the Tantalus Mountains.

The train departs from North Vancouver, and travels below the Sea to Sky Highway, with views out to Howe Sound and beyond. Other highlights include the Cheakamus Canyon, crossing a trestle bridge and passing by an extinct volcano. The open-air Heritage Observation Car makes it even easier to get closer to nature.

There are two types of service aboard the Whistler Sea to Sky Climb: Whistler Dome Service and Whistler Classic Service.

Passing through Cheakamus Canyon aboard the Rocky Mountaineer
Photo by Sue Frause
By SUE FRAUSE at November 24, 2010