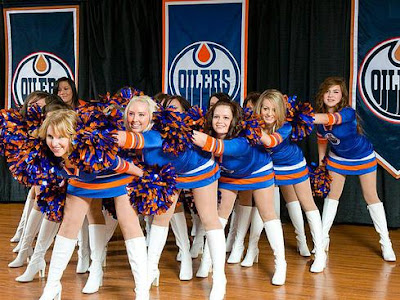 The Edmonton Oilers launched the first-ever Canadian NHL cheer team. Known as Oilers Octane, they made their debut at the Dec. 14 match-up with the Toronto Maple Leafs. The squad is made up of 19 women, ages 18-29. More than 100 dancers auditioned for the coveted spots.

Octane will perform at Edmonton's Rexall Place, helping with promotions and interacting with fans during the team's home games. They will also participate in charity fund raising and other special events throughout Oil Country. Described by the Edmonton Oilers as ambassadors for both the hockey club and the city of Edmonton, an Octane calendar is in the works. The 2011 edition will be for sale at home games and in Oiler Stores at the end of December.

I've only been to two hockey games in Canada. One was on a New Year's Eve more than a decade ago, when the Vancouver Canucks hosted the Anaheim Ducks. The other was a junior ice hockey game in Kelowna, when the Rockets played the Everett Silvertips. There were no cheerleaders, just the loyal fans in the stands.

So how did the cheering go on Tuesday night? The Oilers lost to the Maple Leafs, 4-1. Read more about the game in the Edmonton Journal.