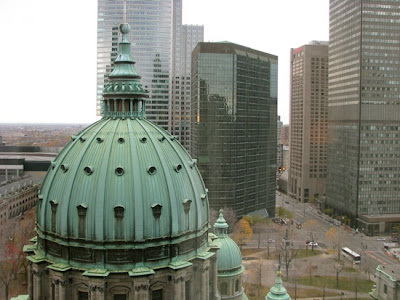 Hollywood actor Paul Giamatti, who won the Golden Globe for Best Actor in a Comedy or Musical for Barney's Version, was ebullient in his remarks about Montreal and Canada.

Maybe it was the Moet & Chandon that was flowing in the ballroom of the The Beverly Hilton, or the five boxes of free Godiva chocolates Giamatti consumed. But his inner Canuck had him praising Canada during his acceptance speech, where he thanked "the incredible family of Mordecai Richler" among other things:

View of Cathedrale Marie-Reine-du-Monde as seen from Fairmont The Queen Elizabeth in Montreal. Photo by Sue Frause (2009).