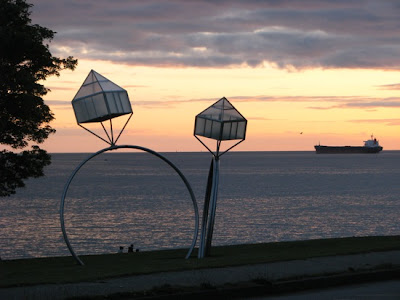 I was sad to read of the passing of US artist Dennis Oppenheim. He died Jan. 22, 2011 in New York City after suffering from liver cancer.

Three of Oppenheim's sculptures were on display in Vancouver over the years. The first, which I never saw, was the controversial The Device to Root Out Evil. It was on display during the Vancouver Biennale in 2005, but objections were raised from some members of the community, and it was removed from its locale near Coal Harbour.

The sculpture was eventually acquired by Calgary's Glenbow Museum, and today resides in the Calgary neighborhood of Ramsay.

The piece I'm familiar with, and enchanted by, is Engagement. It's located on the shores of English Bay in Vancouver's West End.

Vancouver Biennale 2009-2011 continues through the end of the year.

Engagement, by Dennis Oppenheim
Photo by Sue Frause
By SUE FRAUSE at January 28, 2011