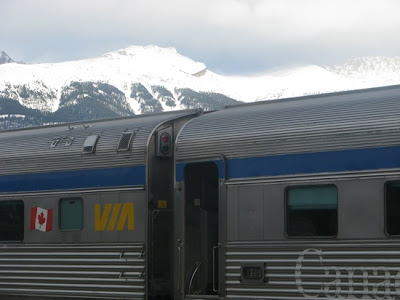 I ran into a friend the other day who asked me about taking the train across Canada. Since I'd traveled from Halifax to Vancouver in November 2009 during my Great Big Canadian Train Adventure, I had some suggestions. They included traveling in the off-season and checking for any specials.

Well, now is a good time to go by rail.

If you travel anywhere on VIA Rail Canada before May 31, 2011 the fares are 50% off. That means 1/2 price off adult regular fares in Economy, Sleeper and Sleeper Touring classes. The offer ends Tuesday, Jan. 25, 2011.

Via Rail Canada in Jasper, Alberta
Photo by Sue Frause
By SUE FRAUSE at January 21, 2011