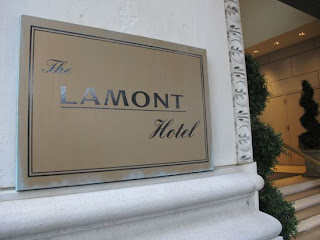 The mystery has been solved! On January 14, 2011 I posted a blog entry with the title, Where in the world is The Lamont Hotel? Vancouver!

I spotted the sign on The Fairmont Hotel Vancouver while staying at the Fairmont Pacific Rim just a few blocks away. One commenter on my blog post thought it might be in honor of Wendy La Mont, Director of Revenue Management for Fairmont Hotels and Resorts. That didn't seem likely.

A more recent blog comment sounded like it could be the solution to the mystery: "I think the sign was there for the season finale of a show called Human Target which is fictionally in San Francisco but filmed in Vancouver."

Google to the rescue! Yes, it turns out that the FOX TV show Human Target is filmed in Vancouver. The show stars Mark Valley, Chi McBride and Jackie Earle Haley and recently had its season finale. No word yet if it's being renewed for a third season, but after getting sucked into watching one of the episodes, I hope it does! 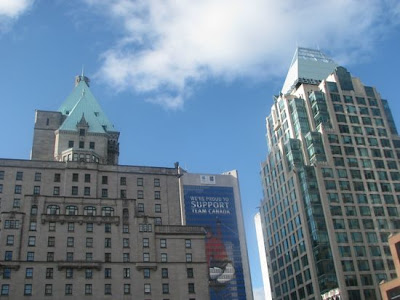 Photos of The Fairmont Hotel Vancouver by Sue Frause
By SUE FRAUSE at February 15, 2011