Canada Dry: Now headquartered in Texas, its roots are in Canada 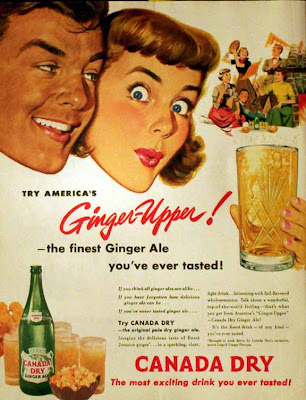 Although the first ginger ales were created in Ireland sometime around 1851, Canada gets the credit for this unique soft drink. We're talkin' Canada Dry. In 1890, chemist and pharmacist John J. McLaughlin opened a small plant in Toronto to manufacture soda water. He sold it in siphons to drugstores to be used as a mixer for fruit juices and flavored extracts. In 1904, McLaughlin came up with the perfect recipe for what he called Canada Dry Pale Ginger Ale. With his development of mass bottling techniques, soon the sparkly beverage was available where large groups of people gathered, such as ballparks and beaches.

In 1923, the McLaughlin family sold the company to PD Saylor & Associates, and formed Canada Dry Ginger Ale, Inc. In the 1930s, Canada Dry Club Soda was added to the product line, followed by Tonic Water. In the '50s and '60s, it was one of the first major soft drink companies to come out with sugar-free drinks and put soft drinks in cans. In 1986, Canada Dry was acquired by Cadbury Schweppes of London. Today, the Canada Dry brand is part of the Plano, Texas-based Dr Pepper Snapple Group, Inc.

Canada Dry celebrated its 100th anniversary in 2004. Here are links to some of its old print ads and TV commercials (this one with Scott Bakula).
By SUE FRAUSE at March 07, 2011