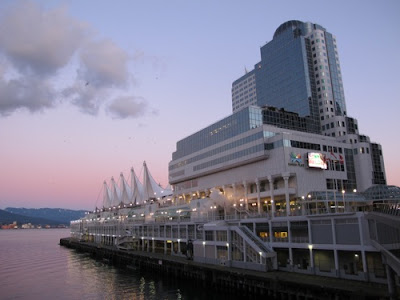 Earth Hour 2011 is being celebrated around the world, including Canada. Organized by the World Wildlife Fund, the "lights out" event got its start in Sydney, Australia in 2007 when 2.2 million people and 2,000+ businesses turned their lights off for one hour to make a statement about climate change.

Last year, Earth Hour 2010 was the biggest ever, with a record 128 countries and territories joining in. Buildings and landmarks around the globe switched off their lights to celebrate the planet.

Earth Hour 2011 is Saturday, March 26 at 8:30PM (local time). One of the many participants in Vancouver is the Pan Pacific Vancouver, which will shut down its non-essential power and lights from 8:30-9:30 PM. Guests of the hotel are invited to the Atrium Lobby and Cascades Lounge for a candlelight experience, and listen to live opera at Cafe Pacifica's Italian Opera Buffet. Guests are also being invited to "dim it" in their rooms during the hour of darkness.

The Fairmont Hotel Vancouver is greeting the hour of darkness in a special way. Griffins Restaurant will feature a $23 three-course raw menu ("big on taste, low on energy output") that's part of Fairmont's new Lifestyle Cuisine Plus program. In the 900 West Lounge, enjoy chocolate fondue and Piper-Heidsieck Champagne specials along with live music by pianist Greg Alcock and vocalist Melody Diachun. Part of the proceeds from the raw menu and bubbly will be donated to the WWF.

The Fairmont Pacific Rim, the newest in the Vancouver Fairmont family, is also celebrating Earth Hour on March 26. From 8:30-9:30 PM they'll be serving a candlelight dinner in ORU, the hotel's pan-Asian bistro. Acoustic entertainment will be featured in the hotel's Lobby Lounge. As with The Fairmont Hotel Vancouver, they're also offering a raw menu that evening.

The bartenders at The Fairmont Pacific Rim are honoring Kermit the Frog ("It's Not Easy Being Green") with his own eco-cocktail aptly named Kermit's Katana. The adult beverage is composed of local artisanal sake from Granville Island; cucumber slices; fresh lime juice; and vodka. Plus, two for one prices during Earth Hour make it an an extra special happy hour.

It is easy to swim if another hoids up your chin (head).