Canada's federal election set for May 2; Rex Murphy gets my vote 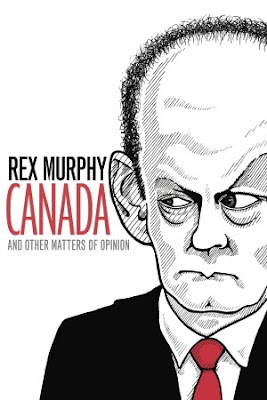 For some reason, I've always thought Canadian politics were much more complicated than ours in the US. But talk to a Canadian, and they feel the same way about our politics and elections. It's complicated, no matter what side of the 49th Parallel you hail from.

After Parliament members voted on March 25, 2011 on the Liberals' motion of no confidence, which found the Conservative minority government in contempt of Parliament, writs of election (an order to hold a special election) were issued by Prime Minister Stephen Harper on March 26, 2011. Canada's upcoming federal election is scheduled for May 2, 2011.

I get most of my political news from CBC's The National. That means I'm a fan of veteran broadcast journalist Peter Mansbridge and political and social commentator Rex Murphy. I've always enjoyed Rex's colorful take on politics and all things Canadian. In 2009, he authored a book, Canada and Other Matters of Opinion. Here's how publisher Random House describes it:

A cornucopia of comment from Canada’s most opinionated man — a man seen, read, and listened to by millions of Canadians each week. Canada’s most distinctive commentator presents his fearless and thought-provoking views on a head-spinning range of subjects, from Dr. Johnson’s greatness to Bono’s gratingness, from doubts about Obama to utter belief in Don Cherry, from Aleksandr Solzhenitsyn’s outstanding oeuvre to — well, Pamela Anderson.

The topics are as eclectic and wide ranging as the intelligence that put them together. The perspective is thoroughly Canadian, and so are many of the recurring topics and themes: of our domestic politics and our military involvements abroad, of our national identity, of human rights and human decency. You’ll find assessments of the reputations of Paul Martin, Conrad Black, Adrienne Clarkson, and Tim Hortons; tough but affectionate views of Newfoundland — of course — but also from Rex Murphy’s constant travels across Canada.

But all the world is here, in all its glory and folly. The hard-hitting attacks on politicians, celebrities, those who would ban smoking, and anyone who uses the expression “global warming denial” will have you cheering or tearing your hair out, depending. You will be informed, infuriated perhaps, but always fascinated.

Murphy was born and raised in St. John's, Newfoundlan. He studied at England's University of Oxford where he was a Rhodes Scholar (along with former US President Bill Clinton). Over the years he's used his talents as a writer, broadcaster and teacher. And yes, dabbled in politics, According to his bio on the CBC website, Murphy worked as an executive assistant to the Liberal Party of Newfoundland's leader. He also ran for office twice in provincial elections (losing both times).

So who are the candidates for the May 2 election? Here's the slate:

So what's Rex Murphy's take on the election? He describes it as "unwanted, unwarranted and unwelcome." Go, Rex!

Vote Compass - In 2010, some of Canada's leading scholars in the field of electoral politics decided to design a Vote Compass for the upcoming Canadian federal election. Vote Compass Canada is a survey that focuses on issues relevant to Canadians and helps them make decisions "that best reflect their individual values and preferences." Take the survey and find out where you stand. Even Americans can fill it out; I pretended I lived in Vancouver, took the survey and came out as a Liberal.
By SUE FRAUSE at March 29, 2011

Rex is always interesting to listen to, however I think in this case an electon however unwanted is called for. You can't have a government which has been found in contempt of parliament stand. Of course the argument is that the opposition parties created this election which many would argue no.That is how they system is set up with these checks and balances to try and keep 'em honest. The speaker of the house started the ball rolling with his ruling which if ignored by the opposition would of given the impression that they didn't agree with the speaker. Yes it can sound complicated and politics always gets people blood pressure up. I'm glad though that in Canada a federal election is quick and spending is regulated. From the web "limits on election spending by political parties are determined by multiplying $0.70 (adjusted for inflation) by the number of names on the registered list of electors for constituencies in which the party has endorsed a candidate (Canada Elections Act, Section 422)"
It prevents billionaires like Trump in the U.S. from having too much of an advantage when campaiging. In fact the current conservative gov't is also in hotwater for fixing the books and overspending on the last campaign by slightly over a million dollars.

Terrific work! This is the type of information that should be shared around the web. Shame on the search engines for not positioning this post higher!