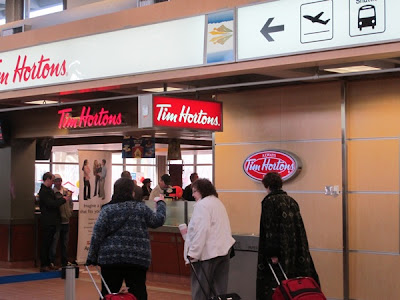 I was impressed that the airport in Kelowna, BC is known as Kelowna International Airport (YLW). It had been a while since I'd flown to this Okanagan city from Seattle, but when I arrived last week for a four-night stay in nearby Vernon, it looked a whole lot bigger than before.

The airport is located on the former site of the Dickinson Ranch in Ellison, and was purchased by the City of Kelowna in 1945 for a mere $20,000. Planes started landing the following year, and in 1947 it officially opened. Its lone runway was a 3,000-ft. grass strip, which was converted nine years later to gravel, and eventually paved.

Over the years, vast improvements have been made, and in 2008 it extended its runway to 8,900 ft. at a cost of $8 million. No longer merely a continental airport, it now has international status. Passenger numbers at YLW in 2010 were an impressive 1,391,725 -- a 1.76 per cent increase over 2009. The 24-hour airport is now the 10th busiest in Canada. Plans for 2011 include expansion of the international customs hall and improvements to the U.S. flight boarding procedures.

I was most impressed by the YLW staff, decked out in red blazers. After going through Canada Customs, a friendly staffer directed us to the airport's baggage claim area. She even asked one passenger if she could help him with his bags!

My other O Canada! moment was when I spotted a Tim Hortons in the arrivals terminal. Since I had an hour before my shuttle was scheduled to depart for Silver Mountain Resort, I popped into Timmy's for an egg salad sandwich. But I passed on the Timbits -- I'd pick up a few on my return flight back home.

But my Tim's moment didn't end at YLW. Our shuttle driver stopped at one of the five Tim Hortons in Vernon to get a cup of coffee for the 45-minute trip up to Silver Star Mountain. I was definitely back in Canada.