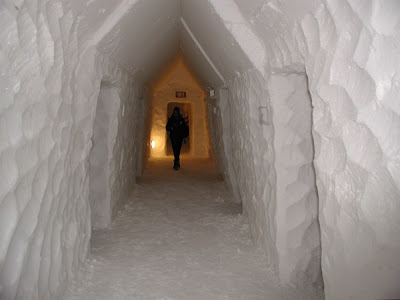 Although it's been seven years since I spent the night in Quebec's Hotel de Glace, I remember it oh, so well. It was cold, real cold.

The hotel has since relocated and is only ten minutes from downtown Quebec City. Now in its 11th season, the 36-room hotel is open for tours through March 27, with the last overnight stay on March 20, 2011. That's the first day of spring! The new hotel still has its signature ice chandelier and its famous cocktails served in glasses made of ice.

During March Break between 7th and the 11th, children 12 and under are admitted free when accompanied by an adult. There are plenty of fun, family activities:

North Face Grand Ice Slide: This season's slide is 66 ft. long, the longest ever. Located in the Grand Hall, the Arctic climate is highlighted with penguins, walrus and a white wolf carved in ice.

Sugar Shack: This is new to the hotel, and oh so sweet. Enjoy taffy-on-the-snow and the meet the owners of the sugar shacks who will share their love of all things maple.

Guided Tours: Learn more about the hotel between 10 AN and 5 PM when guides give tours of the art house made of ice and snow.

Stargazing: On Friday, March 11 at 7 PM, stargaze with the astronomy club Vega from Cap-Route, Quebec. Telescopes will be set up and astronomy buffs will explain the mysteries of the sky.