Earth Day Canada celebrated in April throughout the provinces 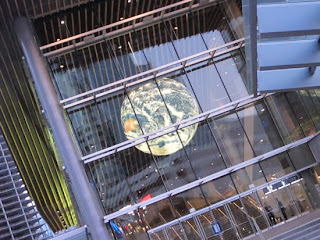 There are hundreds of Earth Day 2011 events across Canada during the month of April. Here's just a sampling of what's happening on April 22, from British Columbia to Nova Scotia. And if you're wondering how the first Earth Day came to be, click on here.

British Columbia: Vancouver is the site of an Earth Day Parade, starting at the Broadway Skytrain and going up Commercial Street to Britannia Field. Family activities, speakers, entertainment.

Alberta: Fifty Canadian cities are competing to be the Green Capital. Participants fill out weekly green activity sheets and earn points for their city. Concludes on Earth Day 2012. Sponsored by The Green Grouch, based in Alberta.

Saskatchewan: The Yoga Loft in Moose Jaw is hosting a Candlelight Meditation.

Manitoba: It's Earth Day at the Marsh at Oak Hammock Marsh. Guided tours of the wetlands, compost and green building tours, healthy water classes and recipes for green cleaning products.

Ontario: The Queen's Lantern in the Canadian Museum of Nature in Ottawa is the venue for the Children's Concert and Award Show. Featuring the music of Keith Shackleton and young award-winning artists in the Waste to Gold and Cloth Bag Design contests.

Quebec: Earth Day at the Biosphere in Montreal. Activities include talks by Mikael Rioux and Sylvie Van Brabant; NFB documentary Earth Keepers; ONE | Outfits from a New Era, an exhibition featuring 16 outfits fashioned from garbage.

Nova Scotia: The Friends of Cranberry Lake in Cole Harbour are holding a community Earth Day celebration and collecting rubbish from the pathways and wooded areas around Cranberry Lake.