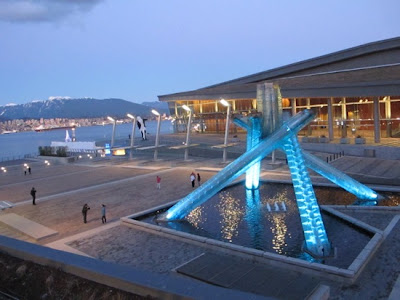 Vancouver, BC is throwing itself a big party on Wednesday, April 6 from 2-10 PM. After all, it's the city's 125th birthday, which is a big reason to celebrate. The party venue is Jack Poole Plaza, home of the Olympic Cauldron, located adjacent to the Vancouver Convention Centre and across the street from The Fairmont Waterfront.

The City of Vancouver was incorporated on April 6, 1886. At the time, there were around 1,000 people living there. Two months later, a brush fire got out of control and burnt the city to the ground in less than 30 minutes. Mayor M.A. McLean, also a real estate guy, started the rebuilding in a matter of days. Read more of Vancouver's colorful history at www.vancouverhistory.ca.

The April 6 celebration is a free, family-friendly event honoring the city's diversity, its First Nations heritage and being designated a 2011 Cultural Capital of Canada. The eight-hour party beings with a ball hockey tournament at 2 PM and then it's live music, DJs, street and video art and food throughout the evening.
Vancouver Mayor Gregor Robertson and other dignitaries will handle the official ceremonies, which include the lighting of the Olympic Cauldron and the cutting of a birthday cake. Here's the full line-up of artists and activities.

Jack Poole Plaza and the Olympic Cauldron in Vancouver
Photo by Sue Frause - January 2011
By SUE FRAUSE at April 04, 2011