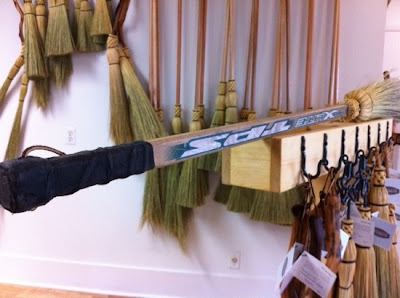 Even if you're not a hockey fan, it's hard to miss the craziness over the Vancouver Canucks. As the team competes in the NHL Playoffs, hoping to bring home the coveted Stanley Cup, businesses are jumping on the puckwagon. Granville Island Broom Company has released a Limited Edition Hockey-Stick Broom. Artisans Mary and Sara Schwieger and Jori Bojm have created fun and functional floor brooms using recycled hockey stick handles.

The three co-owners are all big hockey fans, and think it's a creative way to extend their craft of traditional broom making. When customers started making puns in their shop about the Canucks sweeping the series or sweeping the cup, they knew they had to act on it. "Attaching a broom to a recycled hockey stick was the best way of showing our support," said Jori Bojm. "Plus, we've found a way to practice our slap shot while clearing the kitchen floor."

The Limited Edition Hockey-Stick Brooms retail for $75. They're available at the Granville Island Broom Company for the duration of the NHL playoff season, or while supplies last.

The Granville Island Broom Company was established in 2010, inspired by the work of Rob and Janet Schwieger (parents of co-owners Sarah and Mary). Rob and Janet have owned and operated North Woven Broom Company in Crawford Bay, BC since 1992. The handmade brooms have been featured on TV and movies.
By SUE FRAUSE at April 16, 2011

I received very good information from a web site