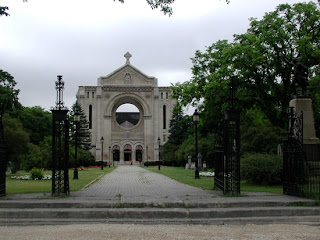 St. Boniface Cathedral is one of 124 Manitoba Provincial Heritage Sites designated by the Canadian province. Located at Avenue de La Cathedrale in Winnipeg's Francophile community of St. Boniface, the site was originally occupied by a small, log chapel built in 1818 by Father Joseph-Norbert Provencher.

Fr. Provencher dedicated the chapel to Saint Boniface, an English missionary monk and apostle. As the first permanent mission west of the Great Lakes, it was the hub of Roman Catholic missionary work, which stretched out to the Pacific and Arctic coasts. It also served the people who lived in the Red River Settlement. 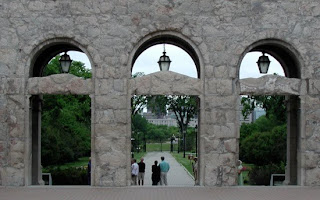 Over the years, five cathedrals have stood on the site. The first cathedral with twin spires was built in 1832 by Bishop Provencher, and 30 years later a stone cathedral was constructed by Bishop Tache. In 1906, the cornerstone of a cathedral designed by Marchand and Haskell of Montreal was blessed by Archbishop Langevin. As the finest example of French Romanesque architecture in Manitoba, it was destroyed by fire in 1968.

The present cathedral dates back to 1972, and was designed by Franco-Manitoba architect Etienne Gaboury. The sacristy, facade and walls of the former basilica have been incorporated into the structure. The tombs of the bishops of Saint-Boniface lie within the facade. 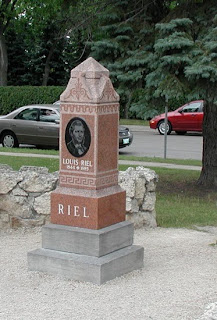 Among the many notables buried in the adjoining cemetery, Western Canada's oldest Catholic cemetery, is Louis Riel. According to The Canadian Encyclopedia:

"Louis Riel, Métis leader, founder of Manitoba, central figure in the NORTH-WEST REBELLION (b at Red River Settlement [Man] 22 Oct 1844; d at Regina 16 Nov 1885). Riel was educated at St Boniface and studied for the priesthood at the Collège de Montréal. In 1865 he studied law with Rodolphe Laflamme, and he is believed to have worked briefly in Chicago, Ill, and St Paul, Minn, returning to St Boniface in 1868." Click on the link to read his full biography.