Canada in Vietnam and Singapore, but where's the bacon? 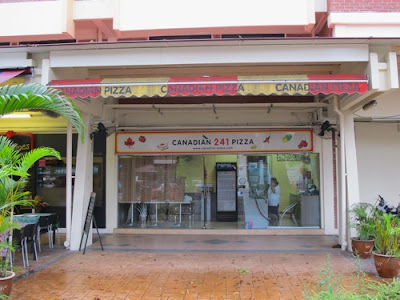 Having just returned from two weeks in Vietnam and Singapore, I can report several Canadian encounters. First there were the people, which included travelers from Quebec in Vietnam's beautiful Halong Bay; a Montreal member of Cirque du Soleil in the mountain resort town of Sapa, Vietnam; and an Alberta lawyer at Changi Singapore International Airport.

Then there was the pizza place in Singapore. At first I didn't "get" the name of the pizza outlet, Canadian 241 Pizza. The 241 simply means two-for-one, or buy one, get a second free. Canadian 2 for 1 Pizza began operating in Asia in 1995 with its first Singapore outlet. They were acquired three years later by Hobbs Holdings Pte Ltd., which started franchising it. The company now has a central kitchen with 28 delivery outlets on the isle country of Singapore.

So what about their Canadian Classic pizza? The ingredients include smoked turkey bacon, beef pepperoni, mushrooms, fresh tomatoes and onions. Not a trace of Canadian Bacon!

Canadian 2 For 1 Pizza in Changi Village, Singapore
Photo by Sue Frause
By SUE FRAUSE at May 16, 2011