Michael J. Fox among 43 recipients of Order of Canada 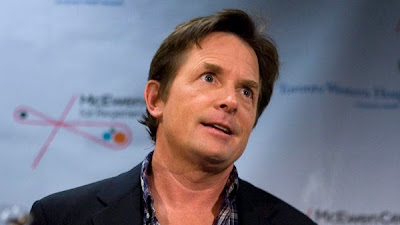 Actor and philanthropist Michael J. Fox, who was born in Edmonton and grew up in Burnaby, BC, is one of 43 recipients awarded the Order of Canada on May 27, 2011 in Ottawa. Presided over by His Excellency the Right Honourable David Johnston, Governor General of Canada, the honors were bestowed on 29 Members and 14 Officers at the Order of Canada investiture ceremony at Rideau Hall. Here is the official description of Michael J. Fox, who has homes in both Vancouver and New York:

Michael J. Fox, Officer of the Order of Canada - Michael J. Fox is an outspoken advocate for people living with Parkinson’s disease, as well as a respected and accomplished screen actor. He is best known for his work in the television series "Family Ties" and "Spin City," and for the "Back to the Future" film trilogy. Diagnosed with Parkinson’s disease in the early 1990s, he has focused his creative energies on funding medical research through the Michael J. Fox Foundation for Parkinson’s Research. He continues to raise funds for the development of better treatments for patients. The Canadian branch of his foundation recently gained charitable status, ensuring the financial support of Canadian medical researchers working towards the ultimate goal of finding a cure.

The Order of Canada was created during Canada's centennial year in 1967. It recognizes "a lifetime of outstanding achievement, dedication to the community and service to the nation." Since its inception, more than 5,000 people from all sectors of society across Canada have been invested into the Order.

Click here to see a video of Michael J. Fox's response via CTV and a complete list of the 43 recipients.

Michael a good guy. I worked with a woman who went to high school with him and was a friend during those years. She showed us photos of those times and Michael was quite a character. She had naturally lost contact with him as he moved onward and upward, but when it was first reported that Michael was ill she felt the need to call his office and left a message. Michael took the time to call her back. Only nice people do that kind of thing, especially since many years had past.

Not surprised to hear this. Michael has always seemed like the real deal ... all the more bittersweet that he was stricken with Parkinson's at such a young age. What an inspiration to others suffering from this horrible disease. Thanks for sharing!