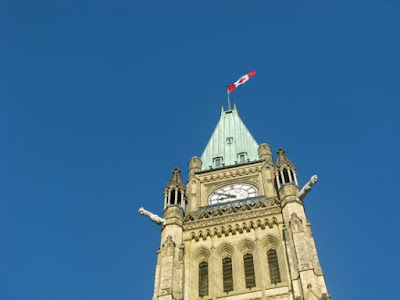 It's probably a given that Ottawa's Canada Day celebration will be the biggest in the country. Last year, the capital city hosted Queen Elizabeth and Prince Philip on July 1, and the crowds were large. This year, it's William and Kate, officially known as Their Royal Highnesses The Duke and Duchess of Cambridge. More than a half a million people are expected to turn out for a look at the lovely newlyweds, who arrived in Ottawa on June 30, 2011 for two nights.

The couple has a full-day planned; probably not much time to head to the beach for a swim. Here's the official itinerary of the 2011 Royal Tour on July 1:

To demonstrate how civic pride is celebrated and the integral role of the Sovereign in our constitutional monarchy, Their Royal Highnesses The Duke and Duchess of Cambridge attend a Citizenship Ceremony welcoming Canada’s newest citizens.

Their Royal Highnesses join millions of Canadians celebrating Canada’s 144th Birthday. Steeped in artistic talent and cultural vitality, Canadians are treated to full military honours, a 21-gun salute and a fly past by the Canadian Forces CF-18s and Snowbirds.

Read about my 2009 visit to Ottawa during a ten-day cross-Canada trip aboard VIA Rail Canada in HuffpostCanada (Huffington Post).

The Canadian flag flies atop the Peace Tower on Parliament Hill in Ottawa
Photo by Sue Frause
By Eat Play Sleep at June 30, 2011