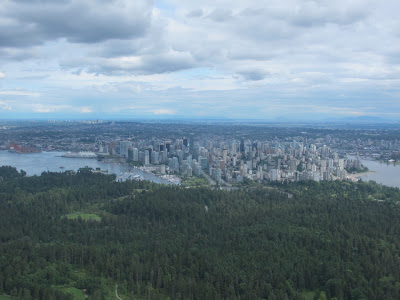 I was in Victoria during Game #7 of the Stanley Cup Final that was played in Vancouver. Although I'd been following the Canucks in their quest to bring home the coveted Stanley Cup, I didn't watch Wednesday night's game. I was having dinner with a friend, and we'd occasionally glance at the game on TV, but quickly lost interest as the score went in Boston's favor. In the end, Vancouver lost to the Bruins 4-0. The quest was over.

When I returned to my room at nearby Fairholme Manor, I turned on the news, and for three hours watched the mad mayhem taking place in the streets of Vancouver. I was mad. I was sad. It was heartbreaking. I wrote about it in Crosscut, an online Seattle-based news site: It's '94 all over again: Hooligans give Vancouver a bad name.

Among the many downtown businesses hit by the hooligans was London Drugs -- their store at Georgia and Granville suffered damage. The company recently released a statement about the June 15 riots on their blog. Here's part of President and CEO Wynne Powell's statement that he issued on June 16:

"We are grateful to our security staff and the assistance from the Vancouver Police Department that our staff were able to leave the store unharmed," said Wynne Powell, London Drugs president and CEO. "This is a sad moment in the history of Vancouver. Our Georgia and Granville street London Drugs store has suffered significant damage and will not open on time today as a result of the rioting. We need to assess the damage."

Vancouver will rise above the madness that took over its city on that dark, dark night. Its people are strong. And those hooligans were so, so wrong.
Vancouver, with Stanley Park in the foreground, as seen from HeliJet the day before the riots on June 15, 2011. Photo by Sue Frause.
By SUE FRAUSE at June 17, 2011

Yes it was horrible and made Vancouverites angry at the mindlessness of it all. However some media is reporting it as if all of Vancouver was on fire." City Ablaze" screamed one headline.
Some people blame the city itself which is ridiculous since this has and can happen anywhere. People have short memories. Google sports, riots and you find it has happend all over the U.S., Canada, Europe...pretty well everywhere.

I think most people realize it's a common occurence with big sports championships, no matter whether the team wins or loses. Unfortunately, the game continues on after the last whistle/buzzer, and boys of all ages go berserk. European football (soccer) is one of the worst. Vancouver has handled it really, really well and what was a black eye will slowly fade and people will forget. Plus, hockey and winter are over and it's time to finally celebrate summer!

Yes summer....as it slowly,very slowly arrives. The only Stanley that is really important is Stanley Park anyway.

I just recently learned that "Stanley" is the name behind both the Stanley Cup and Stanley Park ... I do love the latter!

Yes good old Lord Stanley. Someone dressed the statue of him up in a Canaucks, Jersey, hockey stick and that elusive cup. I don't usually like people doing stuff like that to iconic Vancouver statues...but I did think this one was funny.