Searching for a marmot among the honey bees of The Empress 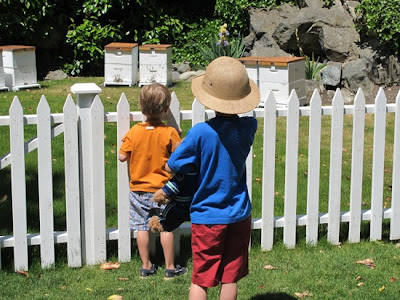 During my last visit to Victoria, the topic of Whistler came up. That's when I mentioned to the group I was dining with that Whistler was named for the "whistling" sound that the resident marmots make. My table mate Angela Rafuse-Tahir of The Fairmont Empress added a whole new layer to the story.

It turns out that The Fairmont Empress has a resident marmot! Roger, a yellow-bellied marmot, has been "living the high life" and residing in the gardens of the iconic hotel since 2008. Roger is thought to have originated in Alberta. Legend has it that he hitched a ride on a bus or automobile to Vancouver Island, landing in Victoria. And his name? It comes from the hotel's longtime former GM, Roger Sloane.

Although marmots are native to the island, the yellow bellied species is not. Roger hibernates from late summer to early spring, enjoying a steady diet of "lush Fairmont Empress foliage." Apparently he enjoys performing stand-up routines for guests, as shown in the photo below. Although a number of groups and organizations have attempted to trap and return Roger to his native habitat, he's managed to avoid capture on at least four known occasions. 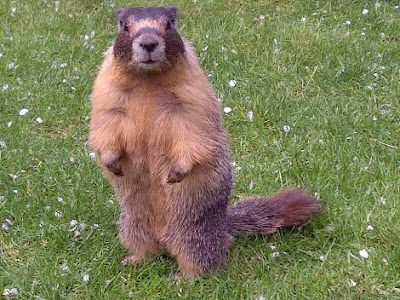 Roger is now sharing his outdoor garden space. On May 26, 2011, the Empress became The Fairmont's 13th hotel to implement a honey bee program. The queen bee and 400,000 honey bees have taken up residence on the grounds of The Fairmont Empress. Apparently, when Roger was notified of his new garden mates, he was "very chipper" in his response.
Unfortunately, Roger didn't make an appearance when I was there, so I couldn't chat with him about life among the bees. Next time.
PHOTOS
Two young visitors check out the bees, but where's Roger? Sue Frause photo
Roger the Marmot. The Fairmont Empress photo
By SUE FRAUSE at June 24, 2011