Live at YVR for 80 days? Vote for your favorite airport dweller 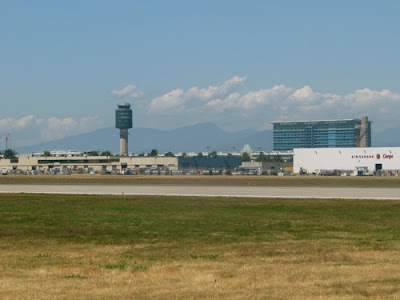 Nearly 100 people submitted videos in the Live@YVR contest held by Vancouver International Airport. Yup, 96 adventurous souls responded to the invitation to spend 80 days and 80 nights at YVR's Sea Island home. It's all a part of YVR's 80th anniversary celebration. From that large lot, five finalists were selected from across British Columbia. The winner will be employed as a special correspondent at YVR, Canada's second busiest airport. Here are the finalists in alphabetical order:

Rebecca Catley, Director of Communications for Vancouver Airport Authority, said they were "incredibly impressed by the quality and quantity of video entries." But now it's up to the public to decide who will tell the behind the scenes tales of YVR. Vote online at www.liveatyvr.ca until Aug. 5, 2011. The selected correspondent will sleep at The Fairmont Vancouver Airport Hotel, live in the YVR community and experience the endless stories of YVR’s 23,600 employees and 400 businesses.

The Live@YVR correspondent will be equipped with a camera and editing equipment act as an all-in-one producer, director, reporter, editor and post-production supervisor. He or she will uncover stories and share the trials and tribulations of living full time at an airport on the Live@YVR website, Facebook and Twitter.
The Fairmont Vancouver Airport Hotel (at right) at Vancouver International Airport (YVR). As seen from Pacific Coastal Airlines. Photo by Sue Frause.
By Eat Play Sleep at July 25, 2011