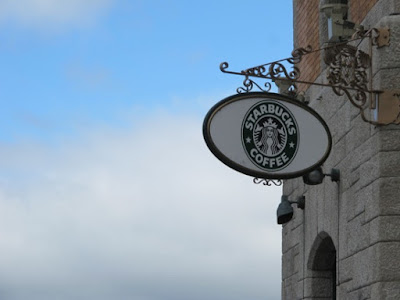 I was surprised to see a Starbucks as part of the mix of retail stores at Quebec City's Fairmont Le Chateau Frontenac. The last time I stayed here in November 2009, I didn't notice it. Well, there are five in Quebec City (one is across the river in Levis), all part of the Seattle-based company's expansion into La Belle Province.
According to The Financial Post, there are less than 50 stores in the province of Quebec, "a market that has traditionally been a tough one to crack for non-francophone businesses."
No surprise that Starbucks opened its first Canadian store in Vancouver, which is a 3.5 hour drive north of the Howard Schultz coffee bean empire. That was in 1987, and today there are 1,070 stores in Canada.
I've yet to go to Starbucks here during my time at the New France Festival, as generally I prefer patronizing a locally owned coffee shop, like the one in Edmonton. Starbucks Chateau Frontenac, located on the terrace level of the iconic hotel overlooking the St. Lawrence River, even has a Facebook page. So far, only one person "likes" it.
By Eat Play Sleep at August 05, 2011

Surprised the " language police " haven't noticed the english spelling of coffee. I was under the impression outdoor signs had to be in French, maybe they are getting more lax?

It's probably a Starbucks copyright issue ... that whenever the Starbucks name/logo is used, it is in English? I was a bit surprised, too.

That must be it. Even in France the shops have the word coffee.
Did find out though that other languages are allowed on outdoor signs as long as French is the predominate language.

big thanks to the author for new)