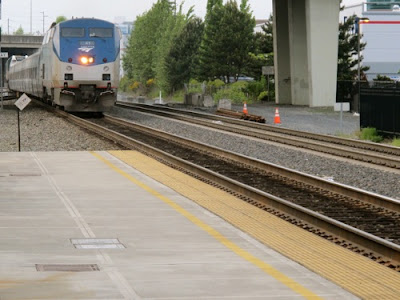 Somehow I missed the news that the second daily Amtrak Cascades train between Seattle and Vancouver, BC was given the green light. It was scheduled to end in October, but the Canadian federal government has waived the border clearance fee, which allows the second train to continue. The announcement was made in Vancouver, BC on Aug. 24, 2011. Washington State Governor Chris Gregoire issued this statement:

“The decision to waive the border clearance fee is fantastic news for both Washington state and British Columbia, as well as for those businesses that have greatly benefitted from the second Amtrak line," said Gregoire. “There’s no question the second train has helped our economic recovery – leading to a significant increase in tourism spending on both sides of the border. At the same time, we’ve been successful in removing thousands of passengers from our roads – easing congestion at our border crossings and decreasing harmful greenhouse gas emissions. The benefits of this train are clear – and imposing a fee would have put those benefits at risk."

The two trains depart Seattle daily at 7:40 AM and 6:50 PM, and Vancouver BC at 6:40 AM and 5:45 PM. The trip takes about four hours, with stops along the way in Edmonds, Everett, Stanwood, Mount Vernon and Bellingham.