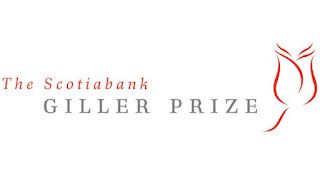 The 2011 Scotiabank Giller Prize jury announced its longlist of books in the running for this year's award. The jury selected 16 titles from 143 books, a record number of submissions. The books were from 55 publishers from every region in Canada.

The 143 books of fiction received this year represent nearly a 50% increase in submissions since the inception of the Scotiabank Giller Prize in 1994. The prize is now in its 18th year. Here is this year's longlist:

The jury had this to say about the selections: “Each title on our longlist dignifies world literature, not only Canadian literature. That said, the Canadian fiction we have unanimously chosen exhibits an astonishing range of dramatic incident, subject, narrative strategy and memorable characters. What connects these wonderful books is an excellence of craft. Many of these novels and collections have intensely cinematic qualities; others, decidedly influenced by l9th century classics. All have the deepest levels of engagement with the art of storytelling and bring life to the page with vivid immediacy. Our list is a celebration of eclectic and fearless writing.”

For the first time, the Scotiabank Giller Prize invited the public to select a book for the longlist. The contest on Books' dedicated Scotiabank Giller Prize page at www.cbc.ca/books received more than 4,000 entries from passionate readers around the country arguing their case for a favorite book. The Readers’ Choice selection was Extensions by Myrna Day, a debut novel published by Newest Press.

The shortlisted finalists will be announced at a new conference in Toronto on Oct. 4, 2011. The winner will be announced at a ceremony in Toronto on Nov. 8, 2011 -- it will be broadcast on CBC Television. The Scotiabank Giller Prize is Canada's most distinguished literary prize. Each year, $50,000 is awarded to the author of the best Canadian novel or short story collection published in English. Finalists on the shortlist receive $5,000. The award was established in 1994 by Toronto businessman Jack Rabinovitch in honor of his late wife, literary journalist Doris Giller. Scotiabank became the co-sponsor of the prize in 2005, hence the name Scotiabank Giller Prize.

Greetings! Extremely beneficial assistance on this informative article! It truly is the minor modifications that make the greatest adjustments. Many thanks a great deal for sharing!