Canadian expats show their loyalty to Tim Hortons in Dubai 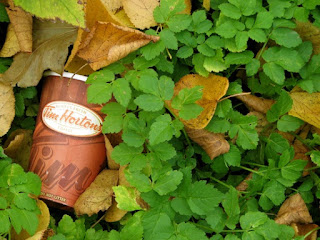 I had to laugh over a link that a Canadian friend posted on Facebook: Tim Hortons outlet in Dubai mobbed by Canadian expats. Yes, my friend is Canadian, living and working in Dubai. And yes, she pleaded "guilty," and was there with the rest of the crowd for the opening.

I wasn't aware that the Tim Hortons chain had expanded into the Middle East. Founded in Hamilton, Ontario in 1964, the company announced earlier this year that they signed a MLA (Master License Agreement) with Apparel Group of Dubai. The agreement includes up to 120 multi-format restaurants in markets in the Gulf Cooperation Council (GCC). Back in 2009, Tim Hortons expanded into New York City.

In a press release issued by Tim Hortons in February 2011, President and CEO Don Schroeder stated: "Our top strategic priority is continuing to grow our Canadian and U.S. businesses which are the primary drivers of shareholder value. We also believe there is an opportunity over the long-term to explore international opportunities and seed the Tim Hortons brand in various markets outside of North America. Our approach is prudent, targeted and will minimize capital requirements while still allowing us to pursue identified international growth opportunities."

The 120 restaurants include both standard and non-traditional units. Locations will be developed and operated by Apparel in the GCC markets of United Arab Emirates, Qatar, Bahrain, Kuwait and Oman. Five restaurants will open in 2011.

Here's another story about the Dubai opening from the Toronto Star.

I cringe when friends in the U.S. think that Tim Hortons defines Canadian food somehow. I find the food bland and the doughnuts average. It could be a regional thing since I grew up in Vancouver and we never even heard of Tim Hortons until sometime in the 1990's, not sure exactly when they opened up here, but it was a central Canada phenomenon for people of my generation.
I believe they are no longer Canadian owned so the pushing of Tim Hortons being patriotic is wearing thin as well.

I do like the Timbits and had an OK sandwich at the Kelowna Airport. Yes, it's Ontario founded, and I think what with the hockey connection of player Tim Horton, it just keeps going and going. Call it Canada's answer to McDonald's + Starbucks. They're still headquartered in Ontario (Oakville)and in 2009 became a Canadian public company. Funny that the busiest store is in Yellowknife! I'm not a big fan of their coffee ...

It's not about the food being the best you've had - it's a part of Canadian culture. You can not go on a roadtrip in Canada without measuring the distance with Tim Horton's locations. It's about taking Timbits to the office and having an Iced Capp on the hot summer day. It's about Tim Horton's community involvement. It's about having that Double Double with your Grandma every week. And when you live far from home, especially somewhere like the Middle East as I do, it's about having something familiar.

Beautifully put, Lynn ... there is a history, and it's a Canadian tradition. It's not about the food, it's about the memories. Thank your for sharing yours!

Just to clariy. Tim Hortons may have become a publicly traded company in Canada but it is still U.S. owned. Here's something from the CBC.
"U.S. burger giant buys Tim Hortons doughnut chain
Broadcast Date: Aug. 10, 1995

On Aug. 8, 1995, American fast food chain Wendy's has bought Canada's number 1 doughnut chain, Tim Hortons, for $400 million Cdn (not $580 million as heard in the clip). The friendly merger had been anticipated ever since a Wendy's and a Tim Hortons franchise set up shop under one roof in Montague, P.E.I., in 1992. The unlikely marriage was the brainchild of Danny Murphy, referred to as one of P.E.I.'s fast food kingpins in this radio report. "

Thanks for that info. I've always been confused about who the actual owners were. They certainly keep that under the radar as I think they want the Canadiana aspect of Tim Hortons to carry on ... appreciate your comment!